I saw my father cry twice. The first time was just after my mother died. The next time was when I was gathering the stories of his WWII experiences. I was collecting those stories because I didn’t want them to go away. I wanted generations from now to know who their great, great, great grandfather was.

It was July 1944. Dad was an artillery man, a gunner and officer in command of a battery of eight – 25 lb. guns. They were pushing the enemy up the Falaise Road in France. Dad and his best friend were on foot just behind the infantry, not 100 yards from enemy snipers in a church. They were radioing back the target coordinates for their guns.

And then, in an instant, his friend lay dead beside him. At this stage, Dad stopped talking. I could feel the heat coming off his body. He was back there for the second time. He cried softly and I stayed silent until he was ready to talk again. He then said he called for a ‘Mike Target’; not just his eight guns, but all 24 guns of the 6th Brigade, 2nd Canadian Division, to rain their firepower on essentially the spot he was standing. His rage at the loss of his friend focussed him on moving the enemy. 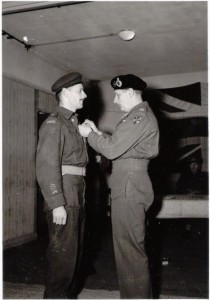 I spent two years gathering my father’s stories, and then my sister and I turned them into a book that we launched with Dad in front of his friends and family. Everyone has a copy of the book. My father’s legacy for future generations, his stories and book, will be read by our ancestors many, many years from now.

So, do you know someone whose story you’d hate to disappear? Have you ever said “I’d love to have their story”? Collecting their stories will be your legacy too.

Here’s how I define ‘legacy’ in my book “Legacies aren’t (just) for dead people”:

‘A Legacy is something I create that connects and enhances lives now, and will continue to positively affect others when I’m gone.”

I wrote about ‘Telling’ your own story in a previous HP blog post.

And now the key to gather other’s stories, which will be your legacy and theirs, is: don’t wait!

“My mother told me the other day there’s a lot she’d like to know, but there’s nobody left to ask. The door to the past is closed.” (Garrison Keillor)

Now, how to gather those stories of that important person in your life?

Don’t worry; you don’t have to be a seasoned journalist or interviewer. This is, after all, a conversation. A wise and loved broadcaster once said to me: “I ask simple questions and then get out of the way”

First, let that person know you’d like to talk about their life, their story. Let them know:

“There was never an uninteresting life. Inside the dullest exterior there is drama, comedy and tragedy!” (Mark Twain)

Pin a small microphone on your storyteller for audio only, or set up your video camera, and then ask the ONLY question you need: ‘Tell me about….?’

This question gives your storyteller the right to go anywhere they want to go, and they will do that with more energy and detail than if they were asked a more specific question.

“What the next generation will value most is not what we owned, but the evidence of who we were and the tales of how we loved. In the end, it’s the family stories that are worth the storage.” Ellen Goodman

Don’t let their fortune in wisdom, experience and life’s lessons disappear. Don’t wait to start gathering – because there’s no guarantee your storyteller will be here tomorrow.

Soon you’ll have a simple printed transcript. Or a book, video or audio program. You will have the unique stories of that special person, a legacy that will delight you and generations to come.