A little girl… and a legacy of more story tellers.

Canada’s story teller is gone. But the stories will continue.

For you non-Canucks, Stuart Mclean was our beloved story teller, most recently on CBC radio’s ‘The Vinyl Café’. He knew how to find, build and tell stories that will linger in our minds.

We were colleagues and producers of CBC Radio’s coverage of the 1978 Edmonton Commonwealth Games. Stuart was our guy on the street. I was in the studio ‘packaging’ our six hours of live radio each day. One afternoon Stuart raced back to the studio, pulled his cassette tape out of his recorder, and with a big smile said “give a listen to this”. 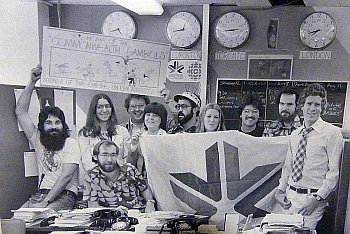 The 1978 Edmonton Commonwealth Games Magazine crew. Stuart’s on the right; I’m in the middle.

The Queen was in town, and Stuart was roaming the parade route. He saw a little girl, about six years old, on the curb in the first row, holding her mother’s hand, waiting for the queen to drive by. But this little girl was on the verge of tears.

Stuart knelt beside her, and with incisive journalistic training, opened a conversation.

“Hi” she replied, almost through tears.

Stuart let the tape roll, and the little girl told her story.

As the queen drove by the little girl sobbed in joy. “Hi queen! “Hiiiiii….”

The parade passed, and she grew quiet. Stuart asked her “Are you feeling better? Are you OK?”

Those of us in the studio were near tears. Stuart was beaming. And then he was gone… off to find and tell other stories.

He’s taught generations of Canadians the power of ‘story’. As a result, I think we’ll soon be hearing from more ‘story tellers’ who will give us the joy and insight of telling us about ourselves.

And he’s taught us we all have stories to tell. Stories that connect us, stories that bring us together.

Tell a story about yourself to someone you love. Go ahead…