I was raised as a good Catholic kid. I was an altar boy, a choirboy, and a boy scout selling Christmas trees with frozen hands on those freezing December evenings to benefit the church. For a while I thought ‘Father Robb’ is what I would become.

It all ended in grade seven. What caused me to stare and have thoughts that would surely cause God to ban me from entering the pearly gates, was Maria.

Now, Maria was only thirteen too, a nice Italian girl. But Maria was beautiful, and had, well, a more ‘mature’ body than some of the other girls. All through grade seven I had dreams of having a family with Maria, but alas, it wasn’t to be. On the first day of grade eight we found out Maria’s family moved to San Francisco. She hadn’t called to say goodbye. She probably thought I got the strap too much.

I was never an altar boy again. But my brush with ‘religion’ stayed with me. Through the rest of my schooling, at university and with life’s gathered experience, I learned a little about the world’s religions, how they had shaped the world, and continue to.

But Legacy and Religion? Does each of the world’s great religions speak of the concept of Legacy? Do these religions talk about creating and leaving something behind to enhance the lives of those that follow us?

It’s worthwhile knowing that in this panoply of religious beliefs that encircle our world, there is one common belief among them about how we should act to affect others. And yes, it’s The Golden Rule.

The Golden Rule! The most universal, consistent and prevalent moral principal in history: Do unto others as I would like them to do unto me. And every religion in the world espouses their version of the Rule. A few examples:

Buddhism – “Treat not others in ways that you yourself would find hurtful.”

Christianity – “In everything, do to others as you would have them do to you; for this is the law and the prophets.”

Hinduism – “This is the sum of duty: do not do to others what would cause pain if done to you.”

There are 13 examples of the Golden Rule in our world’s religions which can be seen in Paul McKenna’s Golden Rule poster. 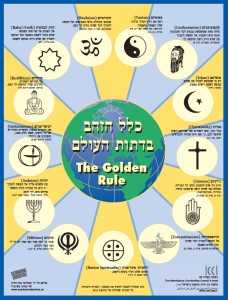 “It doesn’t specifically cover Legacy and all religions”, said McKenna, “but this does a lot of work, real fast. Religions sometimes don’t agree on a lot, but the Golden Rule is a common meeting place, and it fits Legacy.”

The Golden Rule has Legacy infused through it. If I create Legacies that enhance others’ lives, I am an example of, in the popular terminology, ‘paying it forward’. I feel good knowing I will enhance their lives. And those who receive my Legacies will ‘pay it forward’ again… and again. I start a ‘dominos’ of Legacy creation.

But let’s get a wee bit more contemporary, shall we. Our thanks to Bob Dylan:

You’ve got to do unto others